Japanese Campaign Reminds Us Why We Work In Healthcare

New York, New York: A few years ago, I was a volunteer in a well-known children’s hospital in Manhattan. I went in a few days a week and worked across all floors and saw a few children waiting for organ transplants. The kids’ ages ranged from around 1 year into the mid-teens. Their parents set up house in the hospital rooms. One dad even created himself a small architect studio so he could continue to work at his child’s side. Day to day I witnessed all kinds of science, technology and medicine being used to keep the children – and their families – going.

My experience in the hospital was only 6 months long. In that time, I saw more children receive transplants than the number of children in Japan receive them in an entire year. That’s why this piece of work from Second Life Toys struck a chord. Being completely aware of the low organ donor count in Japan and the advanced science available in the world, the creators of this campaign sought to increase the number of organ donors, and therefore actual transplant operations, in the region through a heart-warming comms campaign. And it worked. The campaign received a ton of attention from media and government, educational institutions, celebrities and real, regular people. Donor rates and organ donations increased. The topic became a textbook subject in China. Talk about stepping in the right direction. Watch some of the creative from the campaign here:

During my term at the hospital, there was one little baby who was in from Japan. Her parents were foreign to the United States, living out of a hospital room and working through a language gap. There were a ton of children there who were in from other countries because of the caliber of care that could be provided. Many of them waiting, wishing.  Many of them walking away with a happy ending, some of them not. There were certainly good days and bad – but maybe through communications like this we can see less families living out of hospital rooms. Less families displaced from their native countries; their homes. Less hospital staff hiding in closets in tears. Work like Second Life Toys is a good reminder that what healthcare communicators do can inspire, shifting attitudes and beliefs, and even actions in this case, on a very human level.

As a Marketing Strategist for Syneos Health Communications, Grace is responsible for leading programs designed to engage employees in the critical shifts changing our industry and client expectations. Facilitating strong connectivity between Syneos Health Communications and its Corporate and Business Line partners around the world is critical to Grace’s work. She has been with Syneos Health since 2014, working across the PR, Medical Communications and Advertising businesses. In 2015 she earned Impact Award for showcasing strategic collaboration, entrepreneurial spirit and extraordinary outcomes. 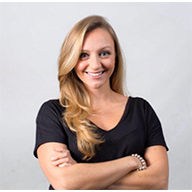